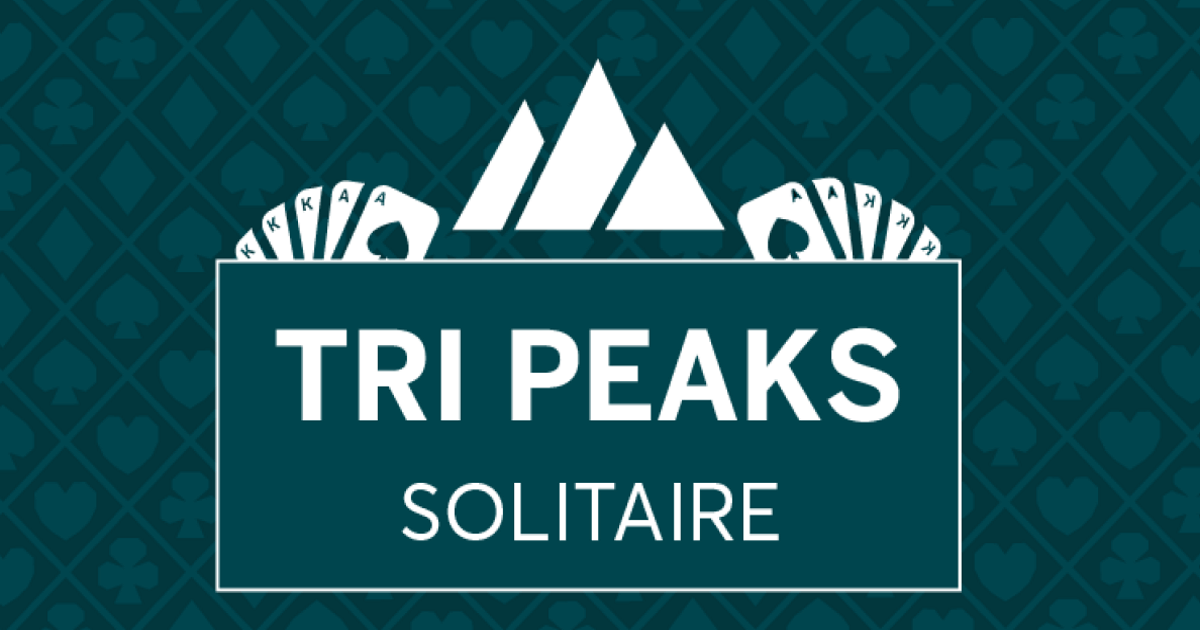 Have Fun Playing Solitaire TriPeaks With Our Complete Rules and “How to Play” Guide!

How To Play TriPeaks Solitaire

TriPeaks Solitaire is a fast and exciting card game with easy-to-learn rules. Read on if you want to know its history, how to play, and how to win this intriguing game!

TriPeaks is also known as Triple Peaks, Tri Towers, or Three Peaks. It's similar to Golf and Black Hole, two other solitaire games. The game uses a single deck, and the objective is to clear three peaks made up of cards.

Each pyramid has a base of four cards and ends with one single card as the peak. This means you have 28 cards laid out in four rows.

Setting Up the Tableaux 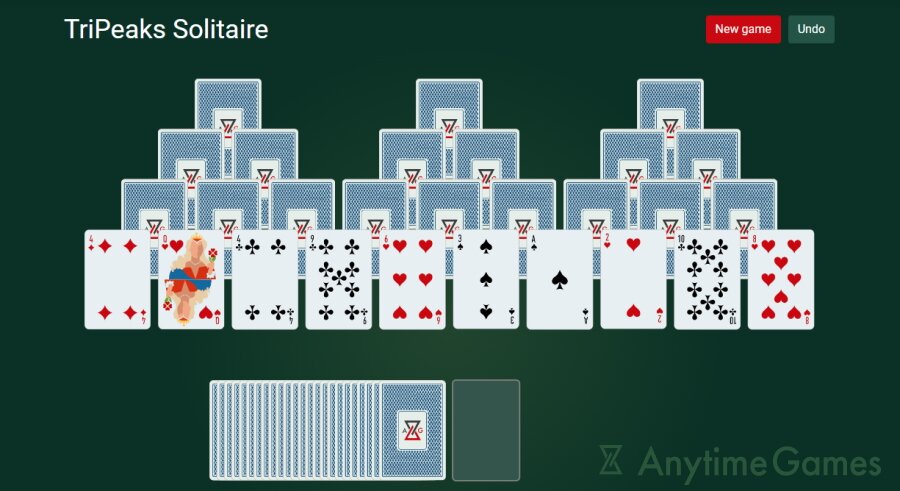 Repeat steps one to three to create two more side-by-side peaks. Place ten face-up cards at the peak's base. Put the remainder of the cards face down in a stock pile on the side. Remove the top card from the stock pile and put it face up next to the stock pile to create a discard pile.

Remove face-up cards that are one level higher or lower than the card at the top of the discard pile to the discard pile. For example, if you have a seven, you can remove either a six or an eight. The color and the suits are irrelevant in a game of TriPeaks Solitaire. This means you can place a red jack on a black queen or vice-versa. 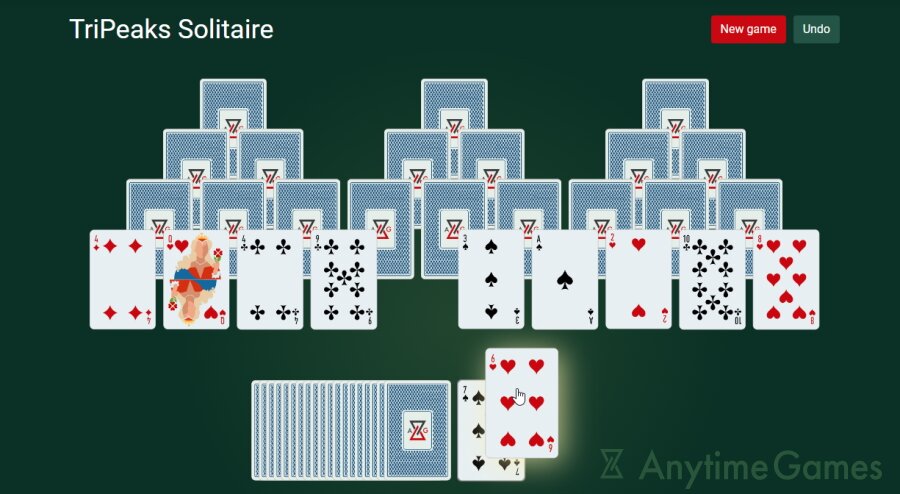 Once you remove a card, turn the cards underneath it face-up if they're no longer overlapping any other card. If a card continues to be pinned down by other cards, you can't take it away.

Think strategically by removing the cards that'll uncover the most cards in the pyramid. Whenever choosing between two or more cards to build a sequence, check to see which cards unlock the most face-down cards. 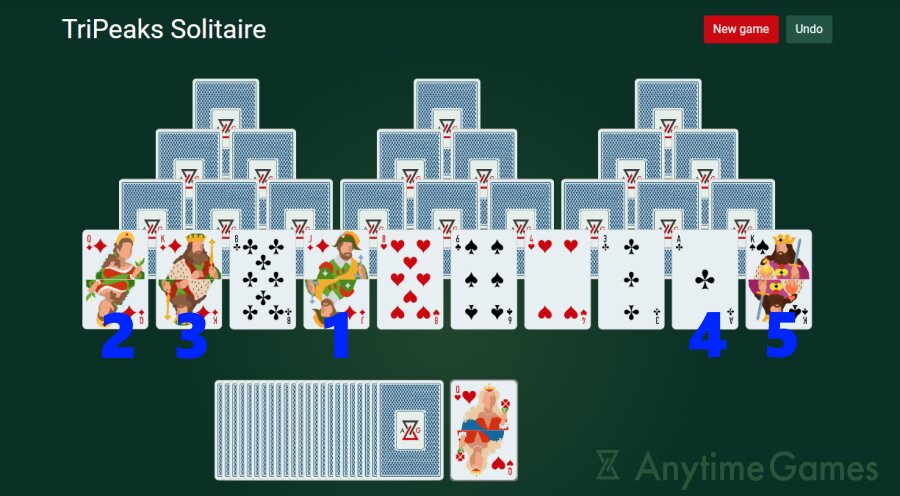 Instead of trying to deconstruct pyramids one at a time, tackle the layout row by row. By doing this, you'll have fewer overlapping cards each time. This will boost your chances of building sequences because you'll have more face-up cards to work with.

If there are no open cards to play, move a card from the stock pile to the top of the discard pile. Don't dip into your stock pile unless you can't move any cards from the peaks. That's because once you deplete your stockpile, you've lost the game.

The inventor performed a statistical analysis on the original game. Interestingly enough, he discovered that over 90% of the games are entirely solvable. This gives you even more reason to perfect your strategy. If all this talk about flipping cards has put you in the mood for a game, play the TriPeaks Solitaire card game online right now!

You can make the game more interesting by using a scoring system. That's what was used in the original TriPeaks game. Winning was less about clearing the peaks and more about using strategy to get a high score.

There are two ways to rack up high scores in this game: clear each peak, and form long card sequences (which means seeing how long you can go before you have to deal a card from the stock pile). If you want to give the scoring system a try, give yourself one point for the first card you discard. Each subsequent discard gets you one more point than the previous one. For example, your second discard earns you two points, on the third discard, you'll get three points, and so on.

If you find yourself having to take a card from the stock pile, the sequence ends. You’ll also need to subtract five points from your score, and the new sequence begins again at one point.

You earn 15 points the first time you discard the top card of any peak. If you do that on the final peak, you'll rack up a whopping 30 points. This also clears the tableau and wins the game.

With the scoring system, you might want to keep some cards strategically in place even if you can remove them. That’s because doing so will help you build longer sequences. Keep in mind that the longer a sequence is, the more points you’ll rack up.

Another way to vary play is by designating one card as a wild card. This makes it easier to clear all three peaks.

One particularly popular variation is having all the cards face-up, which makes the game more strategic. Another way to put a new twist on the game is by starting with an empty discard pile. Then, choose one of the exposed cards to start the discard pile. If you’re up for another type of card game, play Clock Solitaire (Patience) online now!

The History of Solitaire

Robert Hogue created TriPeaks Solitaire in 1989, and it became massively popular after being included in the Microsoft Solitaire Collection. It was originally shipped as part of Windows Entertainment Pack 3. These days, you can even find it in Las Vegas casino machines.

However, the origins of Solitaire go all the way back to the eighteenth century in northern Europe. Back then, everyone called it by a different name—“Patience.” That’s because some people joked that you needed a lot of patience to sit by yourself and play.. In France, it was called Reussite, or “Success.”

Other languages often use the word Kabal or Kabala to describe solitaire, which means “secret knowledge.” The game was given this title because in the early days of people playing this game, some thought it was a form of fortune telling.

The earliest written mention of the game was around 1783, when it was described in a German book. However, it wasn’t originally a single player game, but a competitive one where players would take turns or play with separate card decks. It became popular as a solo entertainment after people began practicing by themselves to get ready for the competitive version.

The English developed a fascination with the game that bordered on obsession. Prince Albert was an avid player, and books of solitaire rules began appearing in the late 1800s in England.

Solitaire didn't make an appearance in the US until 1870. Back then, people called it “Klondike Solitaire.” In the 1900s, this was shortened to “Solitaire.”

A historical untruth that people love to perpetuate is that Napoleon played solitaire during his exile to Elba. However, that’s simply not true. Despite this, many solitaire games continue to bear his name or the name of the island to which he was banished.

In the 1980s, the personal computer revolution catapulted solitaire to new heights of popularity. Not needing to shuffle and deal the cards for each hand made the game play so much more enjoyable. There are over 100 solitaire games. That number exceeds 1,000 when you count all the variations.