Spider Solitaire (Patience) is one of the most challenging of all Solitaire variations. Play our online version today!

Here Briefly are the Rules of Spider Solitaire

Spider Solitaire (Patience) is a fun, exciting, and challenging card game you can play online for free. You should probably play the Spider 1 suit and Spider 2 suit versions before you try your hand at Spider 4 suit. The objective of the game is to arrange all the cards in a suit so that they go, in descending order, from the king all the way down to the ace.

After doing this, you’ll remove the sequence from the board and place it on one of the eight discard piles. Once you’ve successfully cleared the board of all cards, give yourself a pat on the back. That’s because you’ve just won the game, which is no small accomplishment when it comes to Spider Solitaire.

Setting Up the Tableau

To play Spider Solitaire, you’re going to need two decks of cards. Remove the jokers, which should leave you with 104 cards. Shuffle the cards, and then deal out 54 of them in 10 columns, all in a straight line. However, make sure the first four columns have six cards, and the other six columns have five cards each.

You’re going to want to see each card, so place each card slightly lower than the card it’s lying on. Make sure the top card of each column is face up. All the remaining cards go in a stockpile at the very top of the tableau.

Leave enough room below the tableau for discard piles. This is known as the “foundation,” and it’s where your completed sequences go. 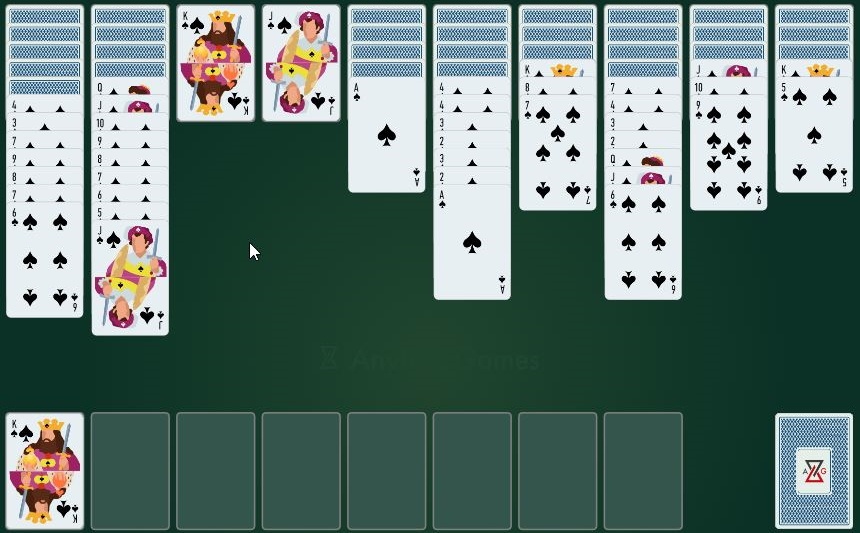 You’re only allowed to move a card onto another card if it’s one higher in rank. This means you can place a five of clubs on top of a six of clubs, hearts, spades, or diamonds. Sometimes, you’ll want to put a card onto a dissimilar suit just to move it out of the way so you can create the sequence you need to win.

However, keep in mind that your mission in Spider Solitaire is to create entire sequences of consecutively numbered cards of the same suit. This is the only way you can remove a sequence from the board (and the only way to win the game), so this is what you should be concentrating on.

You can move cards in a sequence as a single unit to another column if they’re all in the same suit and in descending order. For instance, the Q-J-10-9-8-7 or 7-6-5-4 of any suit can be moved together to either a full or empty column. Try to think strategically and position cards to form the sequences you need to clear the tableau.

Remember to turn the top card over so that it’s face up after you remove a sequence from a column. All too many newbies forget to do this, which limits their possibilities.

The Strategic Use of Empty Columns

If there are any empty columns, you can move single cards or card sequences to them. One thing that makes a lot of strategic sense is to move a king to these open slots as soon as possible. That way, the king won’t block you from forming the sequences you need to clear the board and win the game.

Remember that the king can’t be placed on any other card because no card’s higher in value than a king. The only place you can move a king to is an empty column.

When To Draw From the Stockpile

The only time you should draw more cards from the stockpile is if you’re 100% certain that you’ve exhausted all your options. A lot of extra cards on the tableau unnecessarily complicates strategic decisions.

Also, the rules say that you can’t draw more cards unless there’s at least one card in each column. However, you can place a single card or a sequence of cards in an empty column.

This means that the only time you won’t be able to take additional cards from the stockpile is if you have fewer than 10 cards in play. You’ll lose the game if you can’t form sequences with the remaining cards when this happens.

Every Spider Solitaire game starts with 500 points. Every time you make a move, deduct one point from this score. You get a whopping 100 points for each sequence you remove from the tableau.

Once you create a king through ace sequence, remove it from the tableau and place it on the foundation. You win the game when you complete eight sequences.

A Little About Strategy

Try to place higher cards first. For example, put the queen on the king before moving the jack onto the queen. This will help you to form sequences faster.

Empty columns as soon as possible. That way, you can move your kings into these spaces, making sequence formation much easier.

Lastly, try to keep sequences all within the same suit. While you might need to temporarily form sequences from dissimilar suits, this should be kept to a minimum.

Spider Solitaire is more challenging than many other Solitaire games. Start out by playing the one-suit version to make it easier. This is sort of like having training wheels on a bicycle. You’ll use only spades with this variation.

Once you’ve gotten the hang of Spider One Suit, you’re ready to tackle Spider Two Suit. With this version, you’ll play with spades and hearts.

Once you learn the basics of gameplay by playing these simplified variants, you’re ready to play Spider Four Suit.

If you’d like a more in-depth look at this game, check out our guide “How To Play Spider Solitaire: The Complete Rules.” You’ll not only learn all the rules, but you’ll also pick up interesting tidbits about this addictive pastime, including history, other variations, and strategy.

If you’re up for an entirely different kind of challenge, try playing Clock Solitaire. On the other hand, Tri Peaks Solitaire or Golf Solitaire might be more your style.