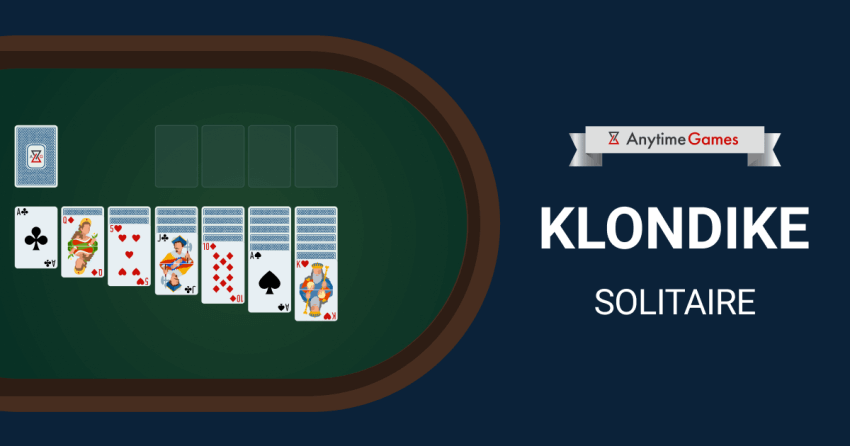 Our Klondike Solitaire guide for beginners tells you everything you need to know to play this card game including rules!

Let's dive into everything you need to know about the Klondike Solitaire card game, including the rules, how to play, and how to win!

To play Klondike Solitaire, take a standard 52-card deck, remove all the jokers, and shuffle the rest of the cards. Create a tableau of 28 cards by dealing one card to each of seven piles left to right. Make sure each stack has one more than the last.

For example, you'll deal one card to the first column (the leftmost one). In the second column, deal two cards, and in the third one, deal three cards, and so on. Turn the top card in each pile face up. 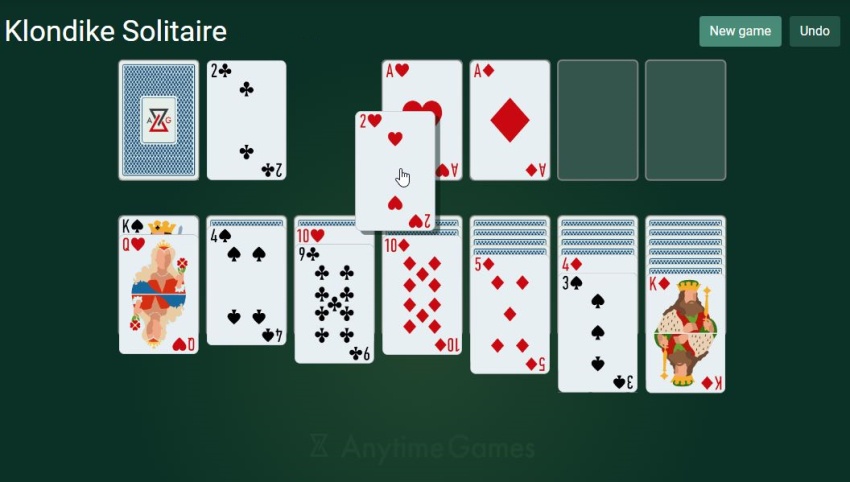 You start by looking at all the exposed cards and see if you can make any move. It's crucial that whenever you come across an ace, place it in one of the four foundation slots.That's because filling all four foundations is the object of the game.

Keep in mind that foundation cards need to be in ascending order, starting with an ace (the lowest card in this game). Each card in a foundation pile needs to be the same suit.

Place tableau cards in descending order and alternate colors. For instance, you can play the 10 of clubs on either the jack of hearts or the jack of diamonds. It's perfectly okay to take a card from the tableau and put it on a foundation if you can. You can also take a tableau card and add it to another column if it follows the rules.

You can move tableau cards as a single unit to another column if the highest card is one lower and an alternate color to the card you're placing it on.

Anytime you transfer a card from one pile of the tableau to another, turn the card that has just been exposed face up. You can now play this card. However, make sure every card below it remains partially visible. Only kings can go in empty tableau columns.

Take a card from the draw pile if you can't make any moves. If you can't do anything with this card, place it face up on the discard pile. You may play it later in the game if an opportunity presents itself.

Once you've gone through all the cards in the draw pile, the game is over. However, some people allow themselves to go through the draw pile more than once.

To do this, take the cards in the discard pile and flip them over without shuffling them. This becomes your draw pile. If you do this, you should probably only do it two additional times.

If you're able to fill the four foundations with ascending cards of the same suit starting with the ace, congratulations! You've won the game. If you can't make any more moves, you've lost.

Alternatively, you can total up the number of foundation cards you have at the end of five rounds. This is your score, which you can try to beat when you play another game. If you can't wait to get started, play the Klondike Solitaire game online for free right now!

Variations of the Basic Game

One way to keep the game interesting is by trying out variations to the basic game. For example, take the first three cards from the draw pile and lay them on the table face up, so only the third card is visible. You can only play the top card of each set of three. If you use that card, you can use the card below it. If you can't, draw three more cards.

In the original Klondike rules, once you place a card on the foundation, you can't remove it. However, some people play a variation where you're allowed to move cards from the foundations back to the tableau.

Don't let Klondike Solitaire fool you. Although it looks simple, you'll need to fine-tune your strategic skills if you want to consistently win games.

Here are a few things to keep in mind:

Klondike is the best-known and most popular Solitaire card game of all time. In fact, in Canada and the US, the term "Solitaire" generally refers to Klondike. Other names for the game include Fascination and Demon Patience. There are many variants, such as Easthaven, King Albert, Thumb, and Pouch.

The game first became popular in the late 1800s and may have gotten its name from the Canadian region where the Klondike Gold Rush happened. The earliest rules for this game appeared in the 1907 edition of Hoyle's Games under the name “Seven-Card Klondike,” which was the gambling version of the game.

Microsoft included a version of Klondike, which they simply called "Solitaire," in all versions of their operating system, beginning with Windows 3.0 in 1990. However, it had a purpose beyond that of merely amusing buyers of the software.

That's because it taught people how to use a mouse—something new and unfamiliar to them. For this reason, Klondike was the most used Windows application for years.

Why the Probability of Winning Klondike Solitaire Can't Be Exactly Determined

Persi Diaconis, a well-known mathematician and magician, has called the inability of theoreticians to calculate the odds of winning this game “one of the embarrassments of applied probability.” While the probability of winning a game of Klondike isn't precisely known, Hoyle's Rules of Games estimates it to be one in 30 games.

Most of the 150 Solitaire variations (such as FreeCell) can be won. However, that's not the case with Klondike. This is because due to the nature of the game, cards can be placed in a position that makes it impossible to win.

Everything is the same as Klondike, except you deal out 10 cards in the first column, nine in the second, and so on until there are three in the last column.

With this variation, you can only build tableau columns with suits different from the top card. For example, if you have a column with the 10 of clubs on top, you can't place another club there. All other rules remain the same.

Deal all cards face up and build your tableau columns with cards of the same color. For example, black on black and red on red.

Deal 30 cards into 10 piles of three cards—two face down and one face up.

This is a casino game where you win money. The house pays you a set amount of cash for each card you successfully place in one of the four foundations.