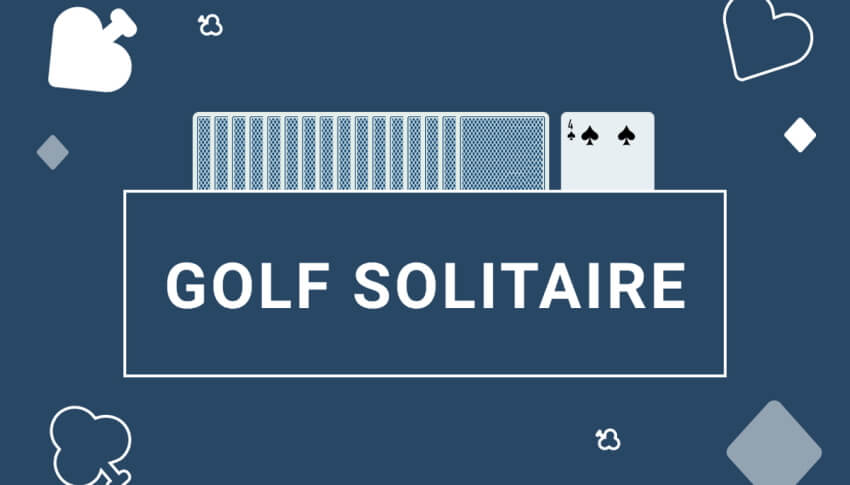 Golf Solitaire (Patience) can be won if you’re strategic. Read the complete rules and how to play if you want to learn to do that!

Golf Solitaire (Patience) card game has a higher skill to luck ratio than most other solitaire games. This guide will teach you the rules, how to play, and how to win this game. While it has easy-to-learn rules, there's tons of potential for strategic play.

The Golf Solitaire game board consists of seven columns. Each column has five face-up cards, creating a tableau of 35 cards. Directly below these columns are a stock pile to the left and a discard pile to the right. Your mission is to move all cards from the columns to the discard pile. However, you can only move the top card in each column.

You can transfer a card from the tableau to the discard pile (also called the foundation) if it's one rank higher or lower than the top card on the discard pile. For example, if the top card is a four, you can place either a three or five on top of it. You can move either a king or two if it's an ace. If you can't move any cards from the columns, take a card from the stock pile.

If you're playing by yourself, declare yourself a winner if you move all the cards from the tableau to the discard pile. Play the Golf Solitaire (Patience) card game online now! 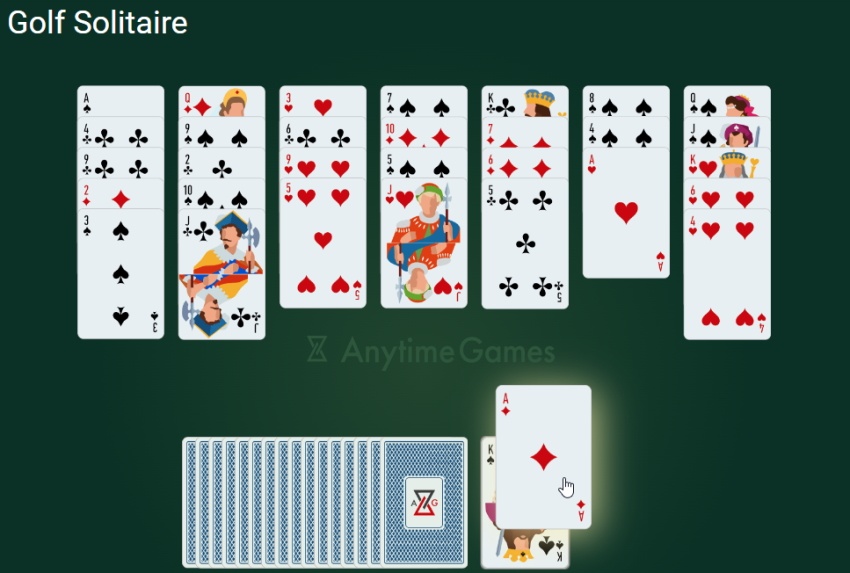 Another name for Solitaire is "Patience". This is a clue to help you realize that a key to becoming an exceptional player is having enough calmness and composure to carefully think about your next move. You should also be able to weigh your alternatives and not lose your cool even if you've made a horrendous mistake. Doing all this will help you cultivate the ability to take a strategic approach to the game.

For example, let's say you have a choice between removing two cards of the same rank. If one is the last card in its column, and the other has cards above it, choose the latter option. That's because removing the last card in the column won't help you remove any other cards. However, removing the card with cards above it will expose new cards, allowing you to form brand-new sequences. This will provide you with more possibilities.

You should also figure out which cards will be exposed when you have a choice between removing cards of equal value. If the card helps you with any other potential sequences, you might want to expose it. This will help you make a longer sequence later. For example, if there are already a couple of fives and sevens exposed, then uncovering a six might be a savvy move.

A skilled Golf Solitaire player is always planning out their sequences and seeing what their alternatives are. That way, they significantly boost their ability to create increasingly longer sequences. The more you play, the more you'll find that the first sequence you see is not usually the best one. In other words, a sequence not readily apparent might help you remove more cards. To make this game even more fun, time yourself and try to break your current record.

If you want to try your hand at a different Solitaire variation, play the Clock Solitaire card game online now!

The original game was meant to be played by a solitary individual (hence the name). However, there are now variations where you can play with a partner. One of these versions is called "Double Solitaire", where you play with one other person. Another variant played with more than two players is called "Simultaneous Solitaire".

If you choose to play Golf Solitaire with other people, you and the other players will try to score the lowest number of points (just like in golf). This is done over the course of nine deals, which is analogous to the nine holes in golf.

If you get a score of 36 or less after playing nine rounds, congratulations! You are now in the upper echelons of Golf Solitaire players. Now that you've perfected your Golf Solitaire abilities, why don't you play Tri Peaks Solitaire card game online now?

Let's say you want to try a Solitaire version with gameplay different from Golf Solitaire. If so, keep in mind that there are more variations of Solitaire than any other card game on the planet. Here are some of them:

To make gameplay more interesting, you can add one or both of the jokers to the deck you can use as wild cards. These cards can represent any value. You can also start with an empty discard pile and choose one of the exposed cards in the tableau to be the starter card.

Playing cards as we know them first emerged in Italy in the fourteenth century. Shortly after their introduction, they became widespread in Northern Europe. Amazingly, Tarokk, a game invented during this time in the region, is still being played. However, Solitaire wasn't invented until the 1700s.

The oldest known Solitaire instructions were published in Russia way back in 1826. This early rule book was called "Sobranie kartochnykh raskludok, izvestnykh pod nazvaniemn grand-pasiansov". This translates to "A Collection of the Card Layouts Usually Known as Grand-Patience".

Lady Adelaide Cadogan wrote a Solitaire rule book just after the Civil War that's proven to be so valuable, it's in its umpteenth printing. This is evidence of the enduring popularity of the pastime. In fact, in the UK, "Cadogan" is a common term for Solitaire - a fitting tribute to this early card game rule codifier.

Napoleon is perhaps the most prominent of all Solitaire players. During his exile at St. Helena, Napoleon took his mind off his troubles by playing the game. This was fitting, as most of his time on the island was spent in "solitary" confinement, away from human companionship of any type. Legend has it that he played a variation where a player has two decks and deals out 40 cards into 10 piles.

Later on, this variant became known as "Napoleon at St. Helena." Shortly after people heard of his affection for the game, they started creating other variants that incorporated his name, including "Napoleon's Square."

Other French citizens with little love for "The Little Corporal" came up with their own names for Solitaire. Most commonly, people called it "La Belle Lucie". However, others referred to it as "Le Cadran" or "Le Loi Salique".

Tolstoy also loved playing the game and even mentioned it in "War and Peace". "Great Expectations", Charles Dickens's second novel, talks about Solitaire. Queen Victoria's husband Albert was known for his immense love of the game.

The Historical Importance of Spider Solitaire

The variant known as Spider Solitaire has a special place in history. It's called that because players come up with eight different thirteen card sequences, and there are eight legs on most spiders. One of the reasons this version became so popular was because it was a personal favorite of Franklin D. Roosevelt, the 32nd president of the US.

Somerset Maugham mentions Spider Solitaire in his book, "The Gentlemen in the Parlour". Dostoevsky is yet another writer who created a Solitaire literary reference. In his case, it was in his novel "The Brothers Karamazov", and the variant he spoke of was called "Fools". American novelist John Steinbeck also featured the game in his book "Of Mice and Men".

Solitaire For a Digital Age

The old-fashioned game of Solitaire became even more popular in the digital age. In the late 60s, Paul Alfille, a medical student, invented FreeCell, another Solitaire variant. Alfille wrote the first FreeCell computer program for the PLATO educational computer system at the University of Illinois, a hulking mainframe computer in the days before personal computers.

After being adapted for PC use, this game became a favorite of technology geeks everywhere. Wes Cherry, a Microsoft intern, invented Microsoft Solitaire in 1988 to get people who weren't tech-savvy excited about using a home computer.

Unfortunately, Wes never received so much as a dime in royalties for his game-changing invention. After Microsoft added Solitaire as a default game to its PCs in 1989, Solitaire enjoyed widespread popularity among individuals just starting to dip a toe in the digital waters.